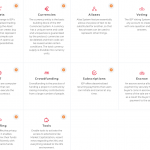 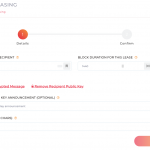 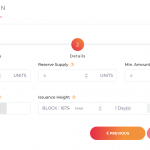 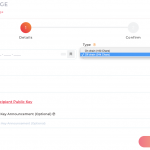 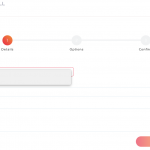 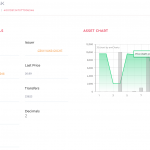 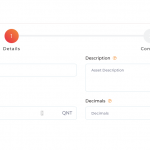 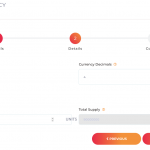 The Asset Exchange is a built-in decentralised trading engine. Using the Asset Exchange you can create, buy and sell assets that represent data beyond simple coin transfers which opens up wide-ranging possibilities. The Asset Exchange is based on the ‘coloured coins’ concept whereby a coin or a set of coins can be designated (‘coloured’) to represent something-else.
By contrast, many crypto currencies only ever operate as just that – currencies, and nothing more. However, since the blockchain provides a trustworthy and permanent ledger of all transactions,it can be used to record far more diverse information than purely currency transactions. A token can be designated (‘coloured’) to represent other crypto coins, stocks/bonds, property, commodities or even ideas. As a result, the network can be used to trade almost anything. The Asset Exchange is suitable for most use cases where users like to buy and sell virtual company shares, fiat-pegged assets, rewarding points or even crypto backed asssets but not for HFT trading since the Asset Exchange is decentralized running with a 60s. blocktime confirmation. The Asset Exchange is completely decentralised and completely unregulated. The substantial benefits this offers are freedom, cost savings, lack of intervention and so on.

Assets are a convenient way to represent anything fungible and tradeable. An asset token could represent a bar of silver, a pizza redemption coupon, a share in a company, even a portion of a portfolio of other assets. By representing these things digitally on the blockchain, they can be publicly verified and easily traded. For instance assets can be used for: private equities, public equities, financial instruments of different kind, patents and much more.

Encrypted Messages commonly take the form of SMS-length communications between users. Transmission of encrypted data messages up to 160 bytes in length from any account to any other account as single message. Encrypted messages can also attached to many transactions like token transfer, asset transfer, currency transfer. Encrypted messages are permanently stored into the blockchain and limited in size to prevent blockchain bloat. Encrypted messages requires a dynamic fee, based on it’s size and should be used for important and immutable messages.

At the most basic level, messages can be used to transmit human-readable messages between accounts, creating a decentralised chat system. Advanced applications can use this feature to store structured data, such as JSON objects. These can be used to trigger or facilitate services built on top.

The Alias System feature of XMC essentially allows one piece of text to be substituted for another, so that keywords or keyphrases can be used to represent other things – names, telephone numbers, physical addresses, web sites, account numbers, email addresses, product SKU codes and more. Immediate applications are simple: you can create an easy-to-remember alias for your XMC account, for example. But since the Alias System is open-ended, it can be used to implement a decentralized DNS system, shopping cart applications, proxies into other blockchains, oracles, references to stored files in bittorrent or IPFS or even as your entry point into decentralized webhosting like zeronet. Aliases can be edited, transferred or sold to public or specific accounts with the build-in alias marketplace.

Account security is possibly the leading issue with the use of crypto-currency: how can a user secure digital funds so that they are completely safe from theft, given the increasing sophistication of malware and hacking techniques. Account control enhances the security of accounts and ensures that only specific people have access to funds, under specific conditions.

Multisignature (multisig) for instance refers to requiring more than one key to authorize a transaction. This enables users to create accounts that can only transact with the approval of holders of specified Assets or Currencies, or to make transactions subject to Votes on spendings.

Multisignature (often called multisig) is a form of technology used to add additional security and for transactions. Multisignature require additional users to sign (approve) a transaction before it can be added onto the block chain. Phasing is another feature that allows certain phasing-safe transactions to be created with conditional deferred execution based on the result of a vote, on a list of linked transactions or on the revelation of a secret; or simply with unconditional deferred execution.

One of the promising applications of the block chain technology are smart contracts. Smart contracts are computer programs that can automatically execute the terms of a contract. Anyone familiar with computer programming would be aware of what is known as an if-then-else statement, where a program executes a certain task if certain conditions are met and does not if the conditions are not present.

Smart contracts implement this on the block chain and have the potential to extend this into another growing field, and that is the internet of things, bringing the world of sci-fi closer to reality. For instance Atomic Cross Chain Transactions allow for truly decentralized trading between cryptocurrencies. This can, for example, enable a trader exchange with a coin that provides a mixing service for the purposes of privacy, and then send it to a new wallet. Another smart contract that would be able to support, are auctions. The blockchain enables you to create a smart auction contract. Participants in the auction would then send money to the contract, and anytime anyone sends more money than the previous bidder, the previous bidder’s money is automatically refunded. Smart contracts include autonomous corporations, self-mixing and smart properties. Smart contracts are being touted as the “killer app” of the cryptocurrency industry, and the race is on to develop applications that will radically transform our work, life and play going forward into the future.

Crowdfunding is the practice of funding a project or venture by raising monetary contributions from a large number of people. Crowdfunding is a form of crowdsourcing and of alternative finance. Crowdfunding is generally based on three types of actors: the project initiator who proposes the idea and/or project to be funded, individuals or groups who support the idea, and a moderating organization (the “platform”) that brings the parties together to launch the idea.

During 2013 $5.1 billion USD was raised by millions of individuals! However the biggest disincentive to using websites such as Kickstarter is their fees. Kickstarter demands 5% of the money raised as a fee, and payment processing fees are another 5%, which in the era of blockchain technology is a little difficult to justify. Based on the built-in currency, we offer this ‘platform’ as a fully automatic decentralized solution for simple, fast and affordable crowdfunding.

An escrow service allows safer payment by securely holding a buyer’s coins in escrow until the terms of the sale are met and as a result the buyer releases payment to the seller. In most cases no dispute is filed and no 3rd party action is needed. The Services provides a decentralized escrow service based on the new enhanced transaction types. If you’re selling your car or house using a decentralized service you can easily put the funds up in Escrow and when the title is delivered in your name you release the money. Even the title can be delivered using a Smart Contract and get this, it costs less than a few pennies to make all of this happen and unlike traditional banking and selling transactions it doesn’t cost hundreds or thousands of dollars. Escrow can have as much as up to 10 co-signers and provides several decision actions like return, split, release.

Blockchain technology lends itself well to use in voting systems. By providing a secure way for each person to register their vote on a public record whilst still maintaining the option for users to remain anonymous, and with little possibility for anybody to tamper with those votes, the blockchain is able to offer significant improvements over current systems in terms of security and transparency. The secure, encrypted, consensus-based nature of the network allows the implementation of a voting system that guarantees anonymity and security, without relying on a central authority to tally votes. The Voting System enables any account to create a poll with one question and up to 10 answers. Accounts are eligible to vote in the poll based on a minimum required balance of an asset or a currency.

Extensions enables third-party software developers to add functionality to the Smart Client Interface. Extensions/Services are an important part for the platform to gain traction in common markets, accessable directly by the smart wallet. In most cases those extensions are based on services built by developers to ‘connect’ those to the platform for instance due to payment logic or dataservices. Since plugins have unrestricted access including sensitive data and functionality, it is very important to install only trusted extensions. If there is any doubt, install an extension only on the Testnet or on Mainnet with accounts having small balances.

Extensions are authored by third party developers and getting an intense peer review prior to release.The foundation will prepare a ‘best practice’ and signed/approved extension marketplace including a comprehensive code review and ranking. Extensions Usage Examples: Marketdata, Enhanced encrypted messaging, marketplaces, data brokerage and more.

The purpose is to build a complete public digital economy, which is also able to ‘interconnect to common, ‘real world’ services to break out from crypto user-space only and reach the mass market. To achieve this objective, the core and client is built for easy extensibility and connection to others, very useful protocols and networks. It isn’t meant to act, as most cryptos, as an island but to embrace and welcome all new technologies, from very classical to the most advanced. Most services are based on enhanced core implementations like proxies and gateways. Services can be public or private, running as UI-less bots or even as extensions within the wallet UI. Services play a very important role in future development and growth strategy, therefore the foundation will take care about enhancing those services and initiate or even develop community relevant services like the enhanced encrypted messaging/chat or news services with external contractors. The list of realized/planned services is growing constantly. Please refer to wallet extensions to get an overview about already implemented and planned services.

The platform provides an additional pluggable data storage layer. Service developers can store data in various backends which can have different performance characteristics. Storage backends can be enabled and configured by editing the storage.properties file or simple by overriding the custom.properties file. Current supported storage backends are MongoDB, RethinkDB, MySQL and PostgreSQL. MongoDB is used as the ‘native’ backend storage used by the peerexplorer and several other services like marketcap and marketdata. More backends and frameworks, especially for realtime data analytics like Hadoop (MapReduce) are planed. Storage backends are meant to used by upcoming services, giving developers a set of ready to use db solution stacks to build public or private services within core-scope. Running within core-space enables storage data to interact with it’s blockchain, transactions and notification system. Due to it’s transparent API access, if configured, storage backends are reachable from smart wallet too.